On the 22nd of January 1997, the first official version of the European Standard for freestanding safes, (EN 1143-1) was published.

Over the years, the document has received numerous updates: including ATM safes and plinths, adding a CD, GAS, and T2 option. A small group met on the 18th of January 2022 to develop proposals for future updates of the European secure cabinet standard EN 14450.

A document was prepared for further discussion in CEN/TC 263 Working Group 1.

This includes the following proposals:

Review of The Standard for Vault Doors and Modular Panels

On 7 January 2022, the UL vote on the UL 608, Edition 7 (Burglary Resistant Vault Doors and Modular Panels) was started.

The UL committee shall vote if the standard may be reaffirmed and continued in its seventh edition as an American National Standard. The commenting period ends on 21 February 2022.

As part of the testing. thermal lances, explosives, or disc cutters with a diameter no larger than 203 mm are not permitted in this testing.

The attack types are pre-defined. In all attacks, two operators can attack at the same time.

From 4 November 2021 to 5 January 2022 the CEN members voted if they are wanting to actively participate on the CEN Preliminary Work Item on:

Denmark disapproved of the project. 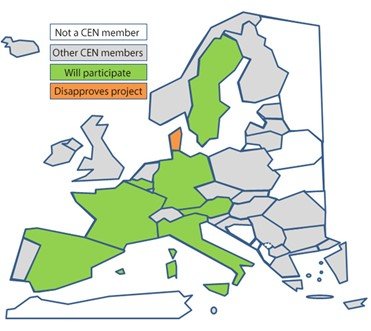 The European working group for the burglary resistant building products had planned to hold a meeting on the 19th of January 2022. However, this event was postponed to a later date, to allow the working group to first wait until the first proposals for the European Smart Lock Standard created by ETSI (European Telecommunications Standards Institute) are available for review.