A Survey by the European Commission on the Security Industry

The EU Commission has commissioned Deloitte to perform the “2021 EU Security Survey” The survey has offered some very general questions around the areas of security broken down to these areas:

For the survey purposes, the Security Industry is defined as private enterprises and research institutions that supply products and services used for civil security purposes. The survey excludes private security companies which provide manned guard service.

Some products and services do not strictly fit in a particular category. For example, products like data rooms and strongrooms can fall into the critical infrastructure area, but classifying products like ATMs or safes into one of the four categories is open to opinion and is subjective.

The survey is open to any company, whether in the EU or not.

Twelve countries voted in favour of the Standard, Italy against. This shows an approval rate among the population of 82.2 % and among the countries of 92.3 % 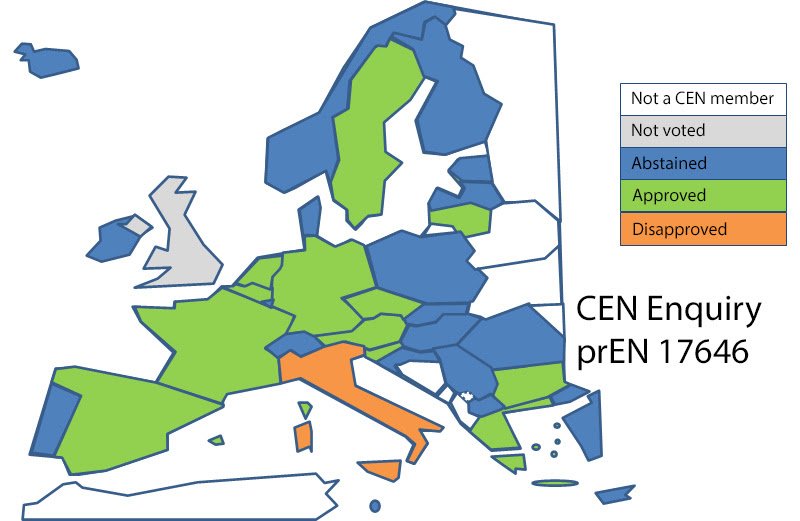 Canada has withdrawn their “P-membership” from the “ISO safe standardization” committee and is now only an observer. The remaining 13 “P-members” are:

This means that currently, the only two continents attending in the international standardization committee are Europe and Asia.

The change shall be integrated as an “amendment” to the Standard (“EN14450:2017+A1:2022”). This amendment vote can be initiated only a short period after this “Work Item Vote” has been finalized.

In our last ESSA-Newsletter the changes for electronic locks in the new pre-Version of the EN 1300 standard (prEN 1300:2021) were presented. Until the real version, which is planned for 2022 changes are possible.

For mechanical locks changes are held to a minimum. In general, locks of class A should already fulfil the new requirement. For locks of class B in the very most cases, no new test would be necessary, for locks of class C and D, depending on the construction and the tools available on the market for the specific product, a new manipulation test may be needed. 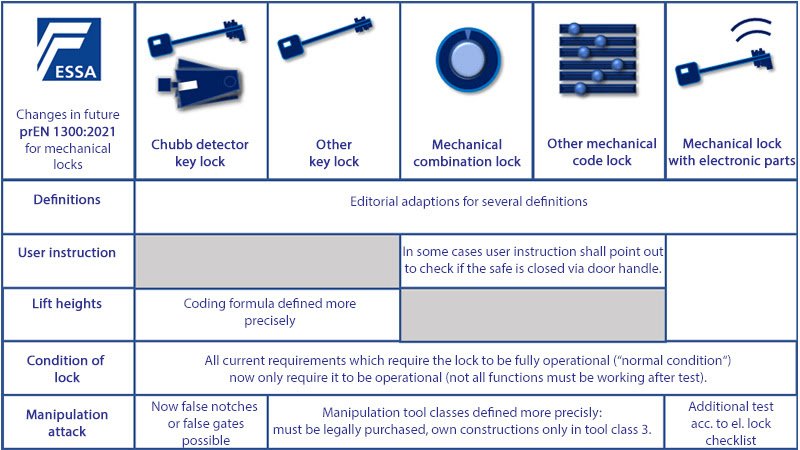 The European Standard for burglary resistant doorsets, windows, curtain walling, grilles and shutters EN 1627:2021 has been published on 2 June 2021. On the same day the associated testing standards EN 1628:2021, EN 1629:2021 and EN 1630:2012 were also published. The Standards are already available as national Standard in Belgium, Denmark Finland, France and Ireland.

The main changes are:

From 10 April 2021 to 1 June 2021 the CEN/TC 33 voted if a new standardization project “mechatronic and electronic security systems integrated in burglar resistant products” shall be initiated. As a majority of the CEN-members voted in favour of the a new standard will be drafted.

The project aims to write requirements on how to test electronic access control systems with the tools of EN 1630 and how the connection between the electronic systems and the burglary resistance door shall be tested. The project is not related to safes.